AN INEXPENSIVE DAY OUT TO NANTWICH – by Fr. Hubert Strowbridge 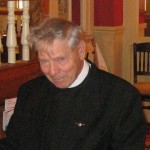 For our outing this time we go to Nantwich.  You may have found that with some of the places we have already suggested for an “Inexpensive Day Out” you felt one day could not do it justice, and a second day out was needed.  I would say Nantwich would be one of those places.

Get to Liverpool by whichever way you find convenient and from there get the train to Chester – from whichever Station is most convenient.  Remember there are now 4 trains per hour from Liverpool to Chester.  At Chester there is the bus – free for ALL rail users to get you to the Centre.  There, get the Arriva 85 Bus – some may prefer to go to the Bus Station for it – others may prefer to get it near Boots.  It leaves the Bus Station at 25 and 55 minutes past each hour and takes about 1 hour to get to Nantwich (it will have Crewe on it as its destination – but we haven’t got time to go to Crewe!).  The Bus Station is in Beam Street, near the Library and near Market Street where the Market is.

It is worth walking a little further along to the Parish Church of St. Mary.  This seems to be usually open – at least from March ’till December and from 10 am until 4 pm.  If you go on a Friday, there is soup and roll and a drink available from 12 noon ’till 1.30 pm.  We include this in our article “An Inexpensive Day Out” as there is no charge for this – but obviously a donation is expected.  Parts of this Church date back to the thirteenth century.  The 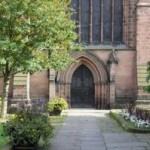 “Creation Window” probably goes back only to 1985.  It depicts life on a Cheshire farm – ascending to the Genesis story of Creation – the hand of the Creator in the Apex.  Halley’s Comet is depicted in the right trefoil.  The pulpit is said to have been carved in 1601.  In the Chancel the life of Our Lady is depicted – giving away the idea that it was originally a Cistercian Church, as all Cistercian Churches were dedicated to some title of Our Lady.  The Communion Table in the Sanctuary is Elizabethan.  The Raredos is dated at around 1921 –  the Rood Screen is flanked on either side by the Patron Saints of the United Kingdom.

I fear that after a little early Christmas shopping gazing it will be time to go home – the 84 leaves the Bus Station at 7 and 37 minutes past each hour – hence the idea that we may want to come back to Nantwich . . .

Fr. Strowbridge would be very pleased to receive your feedback if you decided to visit Nantwich.